By Ms. Cobb - February 04, 2020
Guiding Question:
What was the character of Andrew Jackson's presidency? 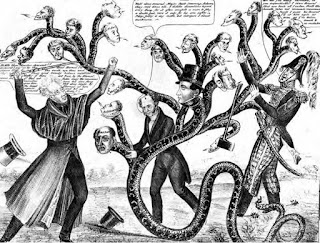 Objectives:
Collaborative:  Students will understand Andrew Jackson’s attack on the bank by viewing a political cartoon, reading, and answering questions in their groups with at least 80% accuracy.

Independent: Students will understand the presidency of Andrew Jackson by completing an evidence scavenger hunt with at least 80% accuracy.

8.8.1 - Discuss the election of Andrew Jackson as president in 1828, the importance of Jacksonian democracy, and his actions as president (e.g., the spoils system, veto of the National Bank, policy of Indian removal, opposition to the Supreme Court).
W.8.2 - Write arguments to support claims with clear reasons and relevant evidence.