By Ms. Cobb - March 05, 2018
Guiding Question:
Was the United States justified in going to war with Mexico? 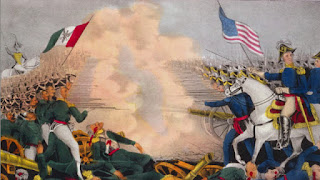 Objectives:
Collaborative: Students will learn about the Mexican-American War by reading and writing a CEREAL paragraph with a score of at least 3/4 according to the rubric.

Independent: Students will understand the Mexican-American War by completing a Webquest with at least 80% accuracy.

Standards:
8.8.6 - Describe the Texas War for Independence and the Mexican-American War including territorial settlements, the aftermath of the wars, and the effects the wars had on the lives of Americans, including Mexican Americans today.
CCRA.R.1 – Read closely to determine what the text says explicitly and to make logical inferences from it; cite specific textual evidence when writing or speaking to support conclusions drawn from the text.
ELD A.1 - Exchanging information and ideas with others.

Collaborative (Voice Level .5 - 1) 45 minutes:
Step 1: Read through Doc A & B together
Step 2: Complete Prewriting Strategies
Step 3: Write CEREAL paragraph to answer the question, "Was the United States justified in going to war with Mexico?"

Here is an evidence bank if you need help with the CEREAL paragraph.

Exit Ticket (Voice Level 0) 5 minutes:
Flip to the calendar section of your Objective Tracker. Add a + for each objective you completed for today and a - for objectives you were not able to complete.