By Ms. Cobb - September 04, 2018
Guiding Question:
What was the character of colonial governments? 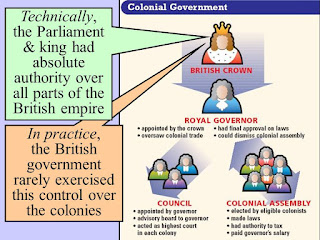 Objectives:
Collaborative: Students will understand colonial governments by reading, participating in discussions, and completing summaries with at least 80% accuracy.

Independent: Students will understand the unique role of colonial government in Salem by completing an evidence scavenger hunt with at least 80% accuracy.

Standards:
HSS.8.1 - Understand the major events preceding the founding of the nation

RI.8.1 - Cite the textual evidence that most strongly supports an analysis of what the text says explicitly as well as inferences drawn from the text.

Do Now (Voice Level 0) 5 minutes:
What do you think the purpose of government is? What does the government of a country or colony do?
Whole Group (Voice Level 0) 8 minutes:
13 Colonies Map Quiz
Independent (Voice Level 0) 40 minutes:
Task 1: Salem Witch Trials Scavenger Hunt in Google Classroom
Early Finisher? Read silently, make sure you've completed all the work for MY class, complete homework for another class, or watch this documentary about the Salem Witch Trails.