By Ms. Cobb - February 11, 2019
Guiding Question:
Was the United States justified in going to war with Mexico? 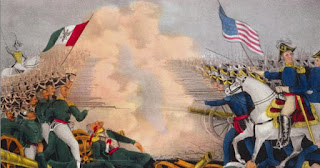 Objectives:
Collaborative:  Students will begin work on the Mexican-American War DBQ by reading secondary sources and responding to questions with at least 80% accuracy.

Independent: Students will understand the Mexican-American War by completing a webquest with at least 80% accuracy.