By Ms. Cobb - February 13, 2019
Guiding Question:
Was the United States justified in going to war with Mexico? 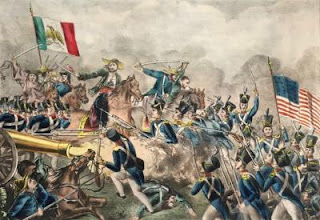 Objectives:
Collaborative:  Students will continue work on the Mexican-American War DBQ by reading primary and secondary sources, completing RAFTS annotations, and writing a CEAS to answer the essential question with a score of at least 8 points out of 10.

Do Now (Voice Level 0) 5 minutes:
What are two things we have already learned about the Mexican-American war?
If you were not here last class: what is one thing you have learned about the relationship between Mexico and the U.S. (think about the Texas Revolution, Manifest Destiny.)
Whole Group (Voice Level 0) 5 minutes:
Westward Expansion Notes
Collaborative (Voice Level .5) 90 minutes:
Task 1: Document A group read & RAFTS annotations
Task 2: Document B group read & RAFTS annotations
Task 3: Construct CEAS response