By Ms. Cobb - October 19, 2018
Guiding Question:
Why did the Constitution allow slavery to continue? 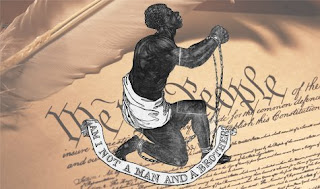 Objectives:
Collaborative: Students will understand why the founding fathers protected the right to own slaves by reading, annotating, and responding to a writing prompt with at least 80% accuracy.

Independent: Students will understand the Constitution by completing a scavenger hunt with at least 80% accuracy.

8.2.3 Evaluate the major debates that occurred during the development of the Constitution and their ultimate resolutions in such areas as shared power among institutions, divided state-federal power, slavery, the rights of individuals and states (later addressed by the addition of the Bill of Rights), and the status of American Indian nations under the commerce clause.
RH.6-8.2 - Determine the central ideas or information of a primary or secondary sourceW.8.1 - Write arguments to support claims with clear reasons and relevant evidence

Early Finisher?:
- Work on homework for another class
- Read a NewsELA, CNN, or Achieve article
- Practice your typing
- Read a book

Exit Ticket (Voice Level 0) 5 minutes:
On board
Homework:
None